Have a question?
Fill in our enquiry form, email or call us and one of our booking staff will be happy to answers any questions you may have.

From following countries and speak to our booking staff in London. 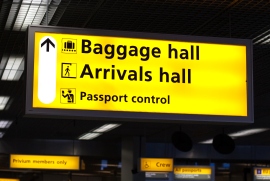 Freedom Airport Service is pleased to announce that it offers a free flight monitoring service for all of its London airport taxi or chauffeur transfers including Gatwick airport, Stansted and Heathrow airport, City and Luton airport. Having a driver waiting to transport you from the airport to your final destination is a very handy thing, but in the event a flight is cancelled or delayed, having to make up for the cost of a driver you didn’t end up needing can be an extra cause for frustration. Flight monitoring is used to ensure that you do not have to pay for this extra cost, and here we’ll go over how it works.
Flight monitoring can be a vastly useful tool, especially in the event that you are not able to make your meet and greet service on time due to a cancelled or delayed flight. Essentially, Freedom Airport Service monitors the flights that its clients take, and if a flight is delayed then the driver is not sent out until the flight is actually due to land. This ensures that your driver will still be there when your flight arrives, and that you do not have to pay for the time he or she spent waiting. If a flight is cancelled, the driver service can be rescheduled at no cost to you.
If you have ever had a flight delayed or cancelled and had to pay for the meet and greet service anyway, you know how annoying and frustrating this can be. Freedom Airport Service is devoted to helping its clients work around the potential problems that come with air travel, and will make sure that you are able to get to your destination after the airport without any extra hassle. Flight monitoring is also combined with a free sixty minute wait service that kicks in after the plane has landed, allowing you plenty of extra time to get to the gate. This allows you to stop for a bite to eat or a cup of coffee after a long flight without having to feel rushed and unprepared.
Freedom Airport Service’s policies are designed to allow you to get through a stressful day of air travel as comfortably and as worry-free as possible. With flight monitoring and free sixty minutes of waiting, you no longer have to stress out about whether your flight will land in time to make it to the gate to meet your ride, so choose Freedom Airport Service and rest easy.
Examples of some of our Journeys

Travel from Heathrow airport to London

Planning how to get to and from any of these London airports and for free flight tracker setup please visit following pages for more information.

Get a Quote Now